Despite going 3-1-1 in his first five games, after Friday night's loss to Dallas (he only played 20 minutes before leaving with a tweaked groin), Jonas Hiller had just a 3.69 goals-against average and .872 save percentage. 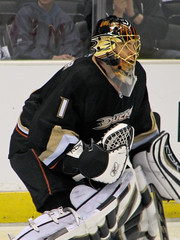 Of the 20 goals Hiller had allowed, 11 of them came on the power play (33 saves on 44 shots, a .750 SV%). That's a significant amount, so it's only fair to say that part of his weak stats stem from the Ducks taking so many penalties.

READ THE FULL ARTICLE ON THE GOALIE GUILD

So maybe Hiller isn't playing as bad as the stats lead us to believe, but he's clearly still shaking off the rust from the lockout.

After watching Hiller's first two games, I noticed most of the goals he allowed were to the blocker side. So over the weekend, in order to better understand exactly what was killing Hiller, I broke down video of all 20 goals he has allowed.