In The Cage: Hackett And Tokarski

As if the loss of Tuukka Rask and Craig Anderson wasn't enough for poolies to handle, now Mathieu Garon is down and out, while Josh Harding left a game last Thursday with a lower-body tweak. The goalie infirmary is running out of beds, and at the worst possible time; the playoffs start today for many poolies, meaning tougher decisions when picking up potential replacements. 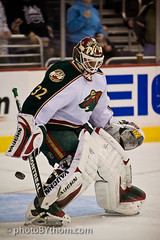 READ THE FULL ARTICLE ON NHL.COM

Due to those injuries, a new pair of rookies now has the potential to provide some solid fantasy points this week -- Matt Hackett and Dustin Tokarski. So which one carries more value down the stretch?

Hackett is trying to survive on a team struggling to win games. The Wild are just 3-6-1 in their last 10, and currently sit eight points out of eighth place in the West. This works in his favor, however, as he's likely to get more looks while the Wild inevitably evaluate their goaltending situation for next season.