In The Cage: Buy-Low Candidates

As the sense of urgency rises for teams hinging on a playoff spot, so too does the sense of urgency for their goaltenders. We've seen hints of brilliance from a few savvy veterans over the last week, so we want to give you the lowdown on four interesting buy-low candidates for the rest of the regular season. There will always an inherent risk with these goalies, but this is universal; if you own them, expect a lot in return. If you want to acquire them, try to sneak a buy-low steal from otherwise unaware managers! 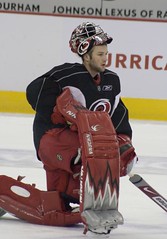 CLICK HERE TO READ THE FULL ARTICLE ON NHL.COM!

1. Craig Anderson: Leading the race in volume stats categories, Anderson is 4-0-1 in his last five games and currently playing the best hockey of his season. He sits first in games played (41), second in minutes (2,289:59), and first in shots faced (1,219). He plays at his best when he's ultra-aggressive and fierce in the crease, so if you see him shoving players in the back and swiping his stick to create space, you know he's on his game. This type of attitude and durability is what made him so successful in Colorado (in the 2009-10 season), and it could make him a major force for the Senators in the second half.

2. Cam Ward: With a monumental 3-2 win over the Bruins last Saturday night, the Hurricanes finally came up on the right side of a tight one-goal game, and Ward was a big reason for that. Sunday's return of Jeff Skinner acted as another morale booster for the team, and now Ward's value is rising. He stopped 89 of 95 shots in his last three games, and has allowed just two goals against in each of his last five games (3-2-0). Keep in mind that Ward's best month in his career is in March (35-11-4 with a 2.29 goals-against average and .924 save percentage), so we feel he fits the profile of a buy-low candidate.