In The Cage: New Year's Resolutions

For every NHL goaltender, a new year opens the door for a new resolve. Those failing to live up to our expectations can still salvage the season by finding ways to reverse their fortunes, but it has to happen starting right now. With this in mind, we pick five of the biggest disappointments so far this season and then post their New Year's resolutions for what we hope will be successful second halves. 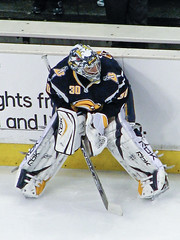 Jonas Hiller -- Must resolve to average at least three more timely saves per game, and must post below a 2.50 goals-against average at home. Heading into January, Hiller is just 7-9-1 with a 3.31 GAA and .893 save percentage at the Honda Center in Anaheim, which calls for much doubt surrounding his second-half projections. We think the potential is there, but the odds are anywhere from low to moderate. Maybe the return of injured forward Jason Blake will help balance the team's offensive attack.

Ryan Miller -- Must resolve to forget the drama that transpired in the first half of the season, and simply focus on stopping pucks by pushing the mental reset button. Regardless of past injuries, poolies expect Miller to be one of the top goalies to own, and he can carry that label in the second half if he clears his mind and rediscovers his true self. To us, that's the one with the aggressive positioning, quality rebound control and even-keeled, confident attitude that frustrates his foes.

Dwayne Roloson -- Must resolve to duplicate the success he had late last season. This starts by simply stringing together three wins in a row. If he can gain that type of momentum in January, he has the experience, work ethic and leadership to quickly reclaim the starting role. This might be the only way Tampa Bay edges its way into the playoffs, and the only way Roloson salvages any legit fantasy value.