Just when you thought all of those elite fantasy goalies were turning on the jets and heating up, Roberto Luongo gets lit up by the Red Wings and then discovers he has an injury. Fortunately, his cracked rib is not too serious, so it looks like he's out of the lineup for only the next two or three games. This is rough timing for many fantasy owners that have been patient with their goalie stars, which begs the question of what to do when injuries do come up that are far more serious. 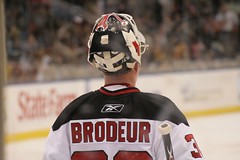 Along with having to deal with injuries to legitimate fantasy goalies, there's always a need to discover new young talent that could take your keeper league to the next level. That's where our monthly updates on the best long-term keeper prospects playing in the minors, the major-juniors and European leagues, known as our Top-50 Keeper League Prospects, comes into play. We just updated our rankings for the month of October on Monday, so check it out and see where your favorite goalie prospect lies.

If you haven't seen this ranking before, just a couple of notes for you: A prospect is defined any goalie that has started five NHL games or less. Antti Niemi has started exactly five games for the Blackhawks, so he is still included in this month's update. When he starts his next game, he'll graduate from the list. If you are wondering why Semyon Varlamov and Tuukka Rask are not on the list, it's strictly because they've started more than five NHL games. Also remember that our rankings are for keeper leagues, so we are looking at goalies that will eventually develop into legitimate #1 guys and have prosperous NHL careers.

Justin if anyone can help me with this, I know you can! I am in a super-deep 18-team league where goalies count for nine of the 22 scoring categories (I know, its nuts…) plus you must meet a minimum of four goalie appearances each week. So I'm always on the lookout for call-ups etc. but would like to get a jump on things if possible. What I'm looking for are the guys who will be the first to be called up in the event of an injury to a starter, even if they may only get 1-2 starts and be sent down any thing would help. For example if Leclaire gets injured (shocker!) who gets called up to back-up Elliott? Thanks in advance for your help! -Shook

Hey man, this is a great question, as it always seems like one of those AHL starters or backups ends up playing some NHL games due to injuries. Like I've said before, it's impossible to know which goalie will be injured at any given moment, there are some goalies more prone to being hurt than others.

Like you said, Pascal Leclaire is one of those goalies. So if Leclaire were to get hurt, you would probably see Andy Chiodo get the call, but then again he's started off the season horribly for the Binghamton Senators with only a 1-4 record and a 4.14 goals against average. Next would be Mike Brodeur, but he's a 26-year-old that doesn't have much better numbers or much of an upside compared to Chiodo.

If you want to find a couple of sleeper 3rd or 4th string goalies, here are some that might get an opportunity: Tyler Weiman (of course), John Curry, Alexander Salak (unbelievable AHL start), Jason Bacashihua (A great start for Hershey and Neuvirth just came back from injury), Corey Crawford, Manny Legace, Al Montoya, Matt Climie. To me, those are the good ones, but to be honest, this is almost impossible to answer because every goalie is prone to being injured at some point in time.

I own C. and S. Mason, Varlamov and Conklin. The Masons were the #1's whom I entrusted would take me to the promise land. Varlamov was the wild card who I thought could provide additional wins or be a bust. Conklin is the solid veteran and handcuff should anything happen to C. Mason. Unfortunately, things have gone terribly thus far and the recent disappearance of the Columbus defense has killed the confidence I had in my goaltenders. I am now considering picking up additional goalies or possibly trading for another. Free Agents and Waiver Wire possibilities: Giguere, Boucher, Elliott, Garon, Harding, Deslauriers, LaBarbera, Biron, Roloson, DiPietro. Since my league counts Wins, GAA, save %, and shutouts, you can see I'm getting hammered. Is it time to "whether the storm" or start making some adjustments?

Hey man, I totally hear you on the crushed hopes with goalie tandems. I also have a team that has both Masons on it, along with Dan Ellis. All I can tell you is to stay patient with them both. Every single goalie is prone to struggling in October ... but it's an 82 game season and there's a lot of hockey left to play.

Do not succumb to all of the wild and crazy people that say Steve Mason or Jonas Hiller or Carey Price is the second coming of Jim Carey. It's not like that for any of them ... at least not as of this writing. Anything is possible and you just have to try and keep your decisions as simple as possible. Do not lose hope. Both Mason's are VERY good goalies and both have a bright future ahead of them for the next few seasons.

Just like Luongo and Brodeur struggled horribly at some point, so too could just about anyone. The only one that has exceeded all expectations was Craig Anderson and I was sure to point that out as soon as training camp started. I really like Brian Elliott and Mathieu Garon as potential goalies. Although Garon might have misleading talent because he put up a shutout then a stinker, I still make sure that everyone knows he's an elite goalie. Especially considering how Steve Mason is playing right now, Garon could be due for some games. Jeff Deslauriers is the other legit goalie on your list. Khabibulin's durability is highly suspect in my eyes right now.

Don't mess with any of the Islanders' goalies, especially Biron. He has the slowest footwork in the league and he's not very big. Even with over-sized equipment. Although DiPietro is interesting if you want to put him on the IR and see what happens when he is actually in the lineup. Otherwise just be patient and see how things look after a few more games for each. Also follow some simple rules like spot-starting (at home, against weaker or struggling teams) and things like that.

Should I trade P. Rinne for J. Hiller? – The Royal Ninja

I think it depends on a few other aspects of your team and league, but on the surface I think it's a good deal. Reason being - Hiller is getting into a rhythm quicker since he's playing more consistently, Rinne is not. That could be a major factor as the season continues to move along.

Also - the Predators' defense is notorious for being porous in the first half of the season...then they tighten up in the second half. Might be good to get Hiller now and try to stay competitive while you can ... but again that depends on where you are at right now with the rest of your league and everything.

Thanks for the response. It's a keeper league and they are both signed to 3-year deals for the same money. I am in the middle of the pack right now as far as standings go. Huet is my other goalie, and I have Elliott and Clemmensen as backups. Also, once a player/goalie is moved out of the starting lineup, they can't be put back in without clearing waivers, or they get traded. - The Royal Ninja

Well since you already have another good young goalie in Brian Elliott, I would think you have a little bit of a buffer zone here. Elliott is a very good young goalie and has great focus for someone who doesn't play a lot. He had a mini-breakout in the second half of last season and had a major overhaul of the style that worked well for him with the Wisconsin Badgers, making him a much more valuable commodity for the Senators. Leclaire is one of the most injury-prone goalies out there right now, so Elliott's stock could skyrocket at any time.

I think Rinne will have a lot more ups and downs this season compared to last year, which has to be expected considering just how unbelievable he played down the stretch for the Predators. Long term, however, I love Rinne's potential and think he will turn into an elite #1 goalie ... but it might not come with the Predators. Nashville has a lot of good young goalies in their system, including Chet Pickard, Anders Lindback and more.

To be honest, with Elliott on your team and Rinne only expected to struggle this season (sophomore jinx) I would probably just stand pat with Rinne and show some patience and ride out his low points this season. Hope that helps!!